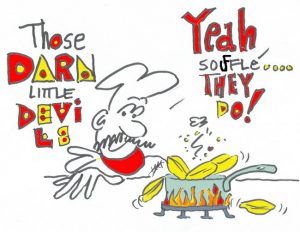 Those “Darn Little Devils” do not necessarily puff on command. It is a trick in itself. Chefs have been known to commit suicide for failing to have them puff.

The thickness of the cuts, then when the potatoes are sliced. Keep those ‘Devils,’ cool in the icebox covered with a damp towel for at least 4 to 6 hours.

You will need two batches of olive oil at two different temperatures.

Highest temp 1st. dump those devils in, for 5 minutes. Retrieve, place on top of dry towels, dry them ‘devils.’

When potatoes are cooled, dump them in the second oil batch, within minutes they will puff. If they don’t… Your chef’s hat is gone, you are back to be a nobody.

This entry was posted in Stella's Easy Recipes. Bookmark the permalink.