A remembrance of the time past

At the end of a distorted path along the cliff of the Brittany coast just before the Chanel turns to be the Atlantic Ocean. As accounted by my Granny, way back then in the days, without many motorcades and a slew of tourists as is today. Lived an old widow, rarely seen at the village. 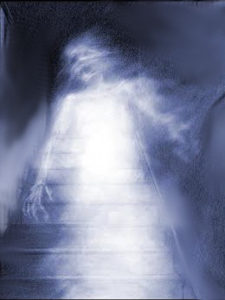 Once a year she will make a small pack with some towels, add some bread, a few tomatoes, a baked potato and carry the load with a stick planted on her shoulder headed to the village-fair. Back to her quarters at the edge of the forest, she usually sat in front of the fireplace with a few oak logs crackling in the flames warming her old bones until she grew tired and gave in to dozing. Soon after a heavy sleep came upon her.

That evening without warning strange noises woke her up.. startled she stood up worried with a keen ear… who could be visiting so late and without calling first?

Worried, she called the police and explained the situation. The voice on the end of the line was poised and calm and asked her to keep her senses. He then said, “I will check where this call is coming from.” After a few moments, he answered, “The call is coming from inside your house.”

“Inside my house… how is this possible? That means he is here in the house with me.”

The voice answered, “He probably broke in.”

“You mean––here in the house with me… right now.”

“As a matter of fact, he is with you… this very moment. It is me the guy who broke in. I am here to kill you, I have not hung up the phone from your call.”

“Why do you want to kill me? I haven’t done anything to you… anything. I can reckon and money is none.”

“A ghost, a ghost right-there seating on the couch.”

“You don’t say… trying to scare me––” the old lady turned around, in stupefaction to see a transparent man seating on her coach.

“I ain’t no come out of my hiding, no siree––no comin’ out” screamed the voice on the phone.

Grandma taken by the words answers: “I’ll cook up some soup for your likin’,’” she turns to the ghost. “And you––would you, indulge to an onion soup?”

The ghost, in its skin of an old man, twisted on his seat…sort of half embarrassed.

“What’s with you? Lost that tongue of yours,” asked Grandma.

“Down here––what’ s wrong with you? Who are you supposed to scare?” Almost the time to finish the sentence the ghost disappears in the wall. The man who threatened to kill grandma comes out from the closet all shaky…, “I can’t stand this place,” he walked to the front door opened it and vanished in the night.

Grandma shook her shoulders, closed the door and went back in front of the fire, put another log in the pit.. She looked at the flames devouring it… mumbled to her teeth, “Strange… very strange… reality is weirder than fiction at times.”

This entry was posted in Blog and tagged Ghost Stories. Bookmark the permalink.

4 Responses to A remembrance of the time past