I am sweet are you too? 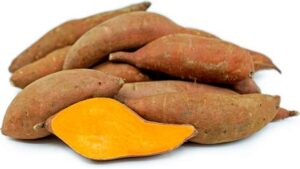 Accordingly, it is an opportune time to learn a bit more about this important food source which (arguably) does not get the respect or use it deserves.

Sweet potato (Ipomea batatas) is a morning glory, family member. The latter contains over 1600 species, most of which are herbaceous vines. Sweet potato is thought to be native to tropical South America where it has been used as a food source for more than 5000 years. Yes, 5000 years. There was people there way before Christopher landed thinking he had discovered something.

The natives call the plant batatas. This word eventually became patata in Spanish, patate in French, and potato in English. Since the introduction of sweet potato into Europe is thought to have preceded that of the Irish potato (another native of South America), the word “potato” was originally a reference to sweet potato and not the Irish one, as is the case today. 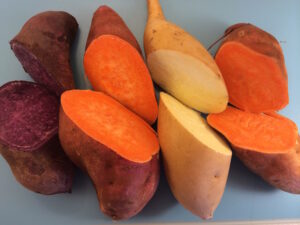 Sweet potato probably first migrated from South America in a westerly direction given that it has been carbon-dated in the Cook Islands to 1000 A.D. It was grown in Polynesia before the Age of Discovery. Early Polynesians who traveled to South America and back are credited with its introduction to their homeland as well as to Hawaii and New Zealand. And we thought we had discovered a new world…, Boo.

Columbus must have encountered sweet potato in his early voyages to the West Indies but it was not until his fourth voyage (to Yucatan and Honduras) that he recorded its discovery in his journals. He is credited with its introduction to the New World (Spain) in about 1500 and a number of different types were cultivated there by the mid-1600s. It was very slow to spread to more northern regions of Europe because of its affinity to warm weather.

The sweet potato was grown in what is now Virginia as early as 1648. From there it was taken both north and south. The southern migration of the plant was much more successful than the northern, again, because of the plant’s need for warm temperatures. Native Americans were known to have grown sweet potato extensively by the 1700s and soon thereafter it became a popular staple of the South. Even today, sweet potato is much more popular in the south than in the north as a food. 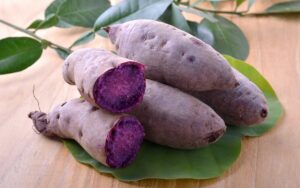 Following harvest, sweet potatoes should be cured in a warm (85 degrees F) and humid (90 percent) environment for several days. This practice produces higher sugar content and better color in the flesh while allowing damaged tissue to heal. Sound sweet potatoes have a storage life of between six to ten months when stored at temperatures of between 55 and 65 degrees F in a humid environment.

Sweet potato is relatively low in calories (a 100-gram serving is reported to contain about 115 calories) and also is an important source of minerals such as calcium, magnesium, and potassium. 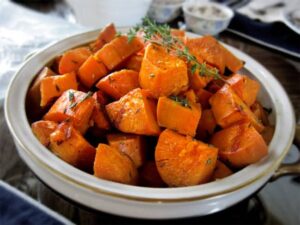 Here you have it.., through all that knowledge, enjoy a Yam as if it was the last time you will ever have one. They are yummy…, yum!

This entry was posted in Blog, News. Bookmark the permalink.